Barsana, the birthplace of Sri Radha Rani, Lord Krishna’s beloved, is more than just a tourist site in Uttar Pradesh. Barsana was present throughout Radha and Krishna’s sacred love affair. Vrishbhanu Maharaj, a close friend of Nand Maharaja, was the father of Radha (foster father of Lord Krishna). It is thought that when Nand Maharaja moved from Gokul to Nandgaon, Vrishabhanu Maharaj also moved from Raval to Barsana. Radha’s love and devotion to Lord Krishna has been the subject of countless stories. According to folklore, Radha saw Krishna as divinity and herself as his disciple. Radha and Krishna were never married because of this reason.

Numerous temples related to Radha’s life and devotion to Lord Krishna may be seen across this religious town. Along with her friends and parents, the town is a showcase of her childhood and spiritual youth pleasures. There are many places to visit in Barsana, Shriji Temple (Radha Rani Temple) is the most well-known temple. Rangeeli Mahal, Kirti Temple, Maan Mandir, and Raja ka Mahal is some well-known pilgrimage sites. Apart from this, Barsana is also known for the popular Lathmar Holi.

Shriji Temple, with its arches, pillars, and red sandstone, appears to be a Mughal-era construction. This popular temple in Barsana is built in the same architectural style as the ancient period. This Hindu temple is dedicated to Radha since it is located on a ridge atop Bhanugarh Peak near Barsana, where she was born. It is also known as Radha Rani Temple and is one of the most popular temples in Braj Bhoomi (of which Barsana is a part).

Radha and Lord Krishna are the major deities of the shrine. You must climb 200 steps to reach the temple’s main gate. King Vajranabh, Radha’s father, built a splendid castle at their base. Tourists and worshippers flock to the temple because of its old appearance as well as its spectacular design and construction. The paintings depicting Radha and Krishna’s pastimes that cover the temple’s walls and ceilings are also a prominent attraction. 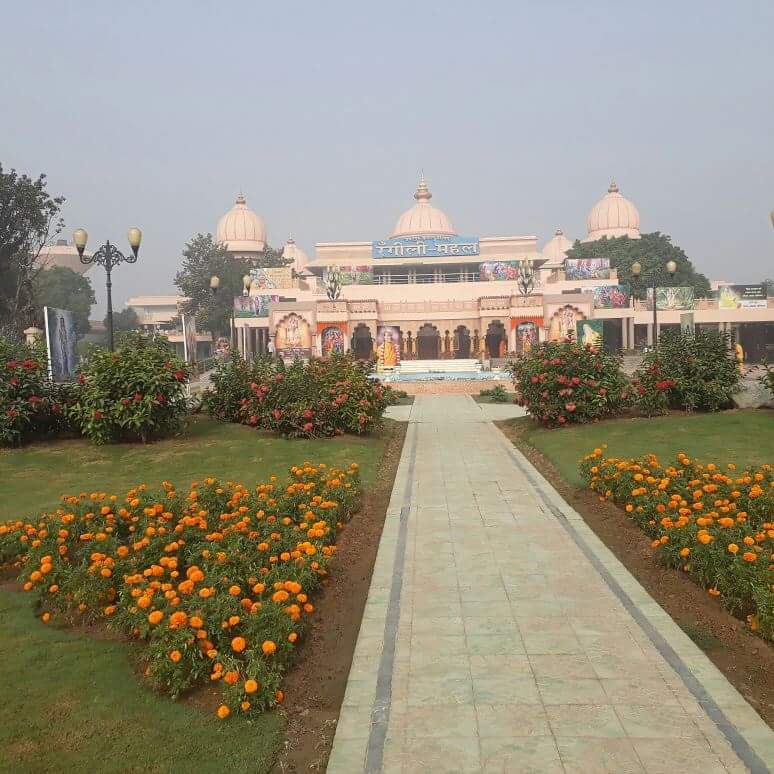 Rangeeli Mahal Pratishthan was formed in 1996 by Shree Swami Prakashanand Saraswati in the sacred region of BARSANA with the blessings of Jagadguru Shree Kripaluji Maharaj. In the year 2000, the beautiful Satsang Bhavan, Northern India’s largest hall, was completed. Shree Swamiji personally envisioned and designed the grounds, which include beautifully landscaped gardens, waterfalls, images of Radha Krishna Leelas, and an illuminated fountain that dances to the beat of the Nam Sankirtan (chanting of God’s name). The president is Sushree Krishna Tripathi.

Thousands of devotees flock to the ashram to honour Shree Maharajji on Guru Poornima. Every day during the summer months at JKP Rangeeli Mahal is filled with Shree Maharajji’s presence, devotional kirtan, and parikramas.

Kirti Mayia Mandir, a temple devoted to Shri Radharani’s Divine Mother and located in Barsana, is unique in that it is the only temple in the world with glimpses of Shri Radharani in the lap of Kirti Mother. Jagadguru Shri Kripalu Ji Maharaj oversaw the construction of the temple.

The temple is next to or adjacent to Rangeeli Mahal Barsana. 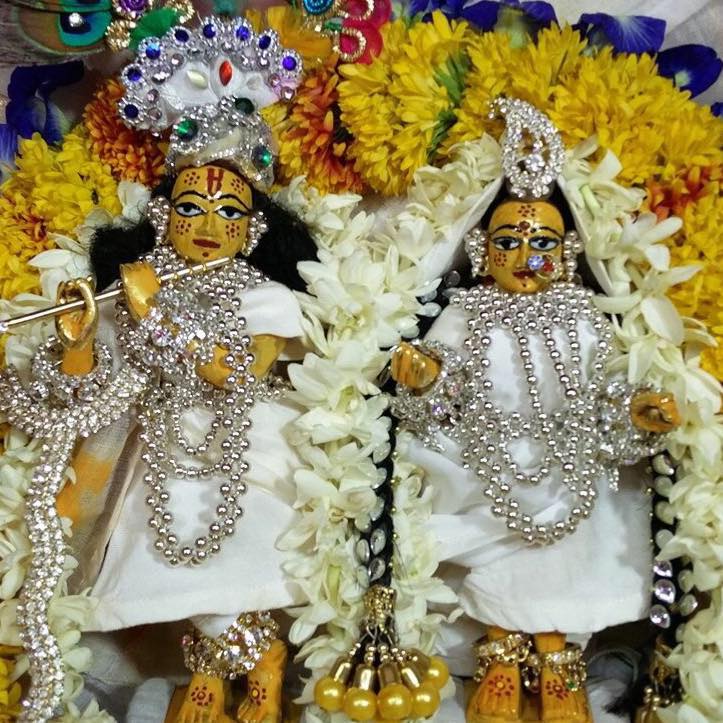 Maan Mandir is located on the Maan Garh, also known as Maan Ghaati, hilltop. It is one of Barsana’s four mountain peaks. Radha would go to Maan Garh, or Maan Mandir as the locals name it, to isolate herself from the rest of the world when she was angry or furious with Shri Krishna. Lord Krishna is said to have done everything in his power to pacify Radha and recover her faith, including showing her the mirror and acting as her chaperone/maid, fanning her like a servant, and even bending his head down in her feet to signify that she was the one in charge of their relationship.

The temple was built to commemorate Krishna and Radha’s quarrels and reconciliations, which constitute a happy but painful part of their relationship. 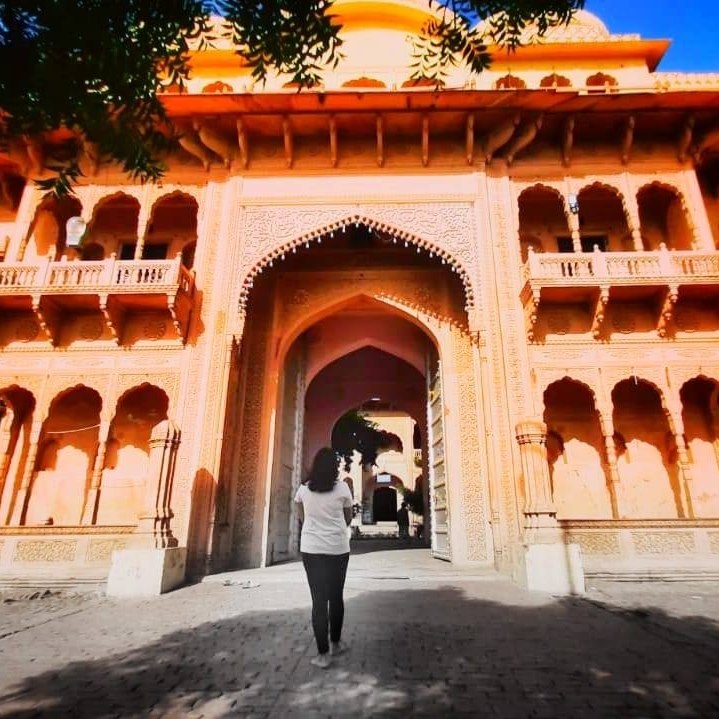 It was the castle of Barsana King where his family lives. It is on top of the hill and a historic place. There are all the things available that are used by King like buggy and many more. It is nearby Radha Rani Temple. Now Raja ka Mahal is also a temple of  Radha Krishan Temple.

When you visit the Shri Radha Kushal Bihari Temple in Barsana, Uttar Pradesh, you will notice that it resembles these Rajasthani forts. This is because the builders of the Hindu temple were inspired by Rajasthani architecture when constructing it. The temple’s facade is almond-colored and rises between the thick greenery of Gahvar Van (the forest where Radharani would relax along with her companions). It also has a small temple, located close to the main one. This one has images of Lord Krishna made from black stone and alloy, along with his companion Radharani.

Things to do in Barsana

Barsana is a famous tourist place that is nearby Mathura. There are many things to do in Barsana like as temple visiting, Barsana is a rural area so has desi food and pure sweets. you can shop from here for clothes saree and Shri Krishna Radha sculptures. 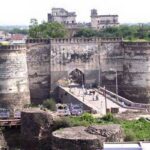 Next Story:
14 Best Places To Visit Bharatpur | Glimpses of Bharatpur

About the Author / Gaurav

One Reply to “Best Places and Temples to visit Barsana”