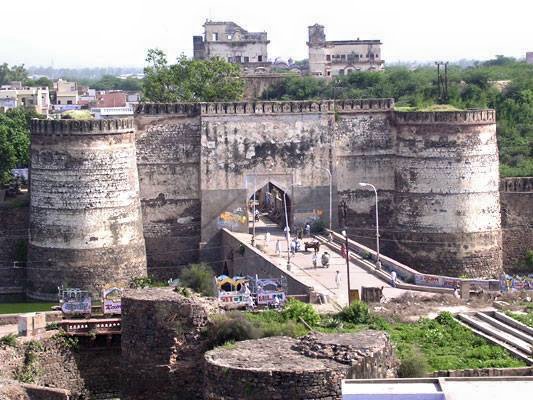 The Matsya Empire flourished at Bharatpur during the 5th century BC. During the Mahabharata conflict, the Matsyas were Pandavas’ allies. According to legend, Bharatpur’s name comes from Bharat, Lord Ram’s younger brother. The other brother, Laxman, was appointed as the ruling family of Bharatpur’s family deity, the most coveted post. His name can be found on state seals and coats of arms as well.

Maharaja Suraj Mal defeated rival chief Khemkaran and created the foundations for Bharatpur in the early 18th century. The brave Maharaja was eager to expand the city, and he is credited with the construction of several of the kingdom’s forts and palaces, including the Pleasure Palace Complex at Deeg.

There are many places to visit in Bharatpur, Keoladeo Ghana National Park, one of the world’s best-known bird-watching locations, is located in Bharatpur. The monarch of the time built embankments that allowed the land to flood, converting it into a marsh. This 29 square kilometres man-made wetland, named for the dense jungle that encircled an old Shiva Temple, is known for migrating birds like ducks, geese, waders, raptors, flycatchers, and more. Avid birders and ornithologists visit the park in the winter to view and study the feathered beauty. KNP used to be home to the Siberian crane, which was one of more than 370 species reported. It is designated as a UNESCO World Heritage Site.

Bharatpur is famous all over India because of this location. Bharatpur Bird Sanctuary, also known as Keoladeo Ghana National Park, is a must-see tourist destination in Bharatpur. Bharatpur has a surprising amount of animals. Though the sanctuary is best known for the swarms of birds that visit year-round, it also has a diverse range of flora and fauna, all of which contribute to the sanctuary’s thriving activity year-round.

The months of October and November are ideal for visiting this sanctuary. By then, the majority of migratory birds had arrived, and the chirp and bustle of the site is breathtaking. Summer is also an excellent time to visit the sanctuary since the cranes have begun their wonderful courtship dances. If you want to tour the sanctuary at any time, there are rooms available within the sanctuary. This is unquestionably one of Bharatpur’s must-see attractions.

The Lohagarh Fort, also known as the Iron Fort, is one of Rajasthan’s most powerful fortifications and a must-see site in Bharatpur. When Jat ruler Maharaja Suraj Mal erected it in the early 18th century, it was given its formidable moniker because of its impenetrable defence quality. The fort is austere and imposing, and hundreds of tourists visit its grounds each year because of its unflappable might.

The Government Museum is located within the fort’s arena. The museum is a good site to learn about the kings of Bharatpur’s employment of the arts of battle and to see the numerous war-related artefacts that were once utilised for defence. The fort also has spectacular views of the surrounding area, so visiting it is a visual pleasure.

Built during the Mughal Empire, the Bankey Bihari temple in Bharatpur is a magnificent temple inside the Lohagarh Fort. The setting is appealing to the eye and conducive to relaxation. The serenity and quiet that pervades the temple, as well as the soothing gongs that echo through the motionless air within, create an auspicious and serene ambience. The temple is devoted to Lord Krishna and contains a number of icons depicting his strength and morality. This temple is one of the most popular tourist attractions in Bharatpur.

The Bharatpur Palace is an impressive and majestic structure that is one of the top locations to see in Bharatpur. It is a reflection of the old Rajasthani city’s culture and heritage, and it provides a fascinating glimpse into Bharatpur’s way of life.

The construction combines Mughal and Rajput architectural traditions to create a one-of-a-kind monument. The enormous apartments are enhanced by richly patterned carpeting and ornately adorned walls. The palace also houses the Kamra Khas, a museum with a large collection of antiques, including 581 stone sculptures, 861 local art and craft goods, and old scriptures depicting Bharatpur’s art and culture.

Because of its unique history, the Ganga Mandir, which was built in 1845, is a renowned tourist destination in Bharatpur. The temple took about 90 years to build, and the result is a stunning and perfect structure in the centre of the bustling city.

The temple’s halls are adorned with several spectacular idols, the most awe-inspiring of which is the figure of Ganga Maharaj. It is entirely built of marble and towers over the temple. Another magnificent sight that the temple offers is the 4-foot statue of King Bhagiratha. With its deep connotations of cleanliness and spirituality, the Ganga Mandir should undoubtedly be on your list of sites to see in Bharatpur.

Laxman Mandir is one of the best tourist attractions in Bharatpur, with intricately carved doors, decorated walls, grandiose arches, and imposing statues. The halls of this temple are etched with a wealth of history and culture. The temple, which was built to honour Lord Laxman’s brotherly virtues, contains statues of Lord Laxman and his wife Urmila, as well as lesser statues of Hanuman, Shatrughan, Bharat, and Ram.

These statues are particularly well-known for their unusual composition of eight metals, known as “Ashtdhaatu.” A visit to this lovely Rajasthani-style temple will allow you to appreciate the culture of Rajasthan in a new light.

The Bharatpur Government Museum is housed in the Lohargarh fort. It is a powerful expression of the local culture and has many unique objects related to Bharatpur’s art, history, and traditions. The stone sculptures, inscriptions, clay artefacts, metallic objects, coins, weaponry, miniature paintings, and local art that are housed there are the museum’s principal attractions.

Inside the museum, there is also a public art exhibit with miniature works on peepal tree leaves, mica, and antique litho sheets. It’s a good way to spend a couple of hours in Bharatpur, appreciating the artefacts and taking in the views.

The beautiful Dholpur Palace, also known as Raj Niwas Palace, is one of the top locations to visit in Bharatpur. The magnificent palace, constructed of red sandstone in the early nineteenth century, captures the attention from afar. The complicated architecture gives the structure depth and purpose, as well as makes it attractive to look at.

Walking through the red sandstone corridors is a once-in-a-lifetime experience. Spending an hour here is a great way to pass the time during your visit to Bharatpur. The Dholpur Palace is particularly lovely in the evening when the setting sun gives the palace a mystical appearance.

The town has a long history of Mughal control, and the legacy and influence of that era may be seen in the many monuments that dot the landscape. The Old Fort and the BarahKhambonki Chhatri are two of Band Baretha’s most prominent historic sites. The Kakund River dam is a nice place to visit.

The Seetharam Temple, a modest yet scenic location, is a lovely place to relax and unwind. This temple is a magnificent site near the natural abundance of nature, located deep within the Bharatpur Bird Sanctuary.

The only things that disturb your meditations in the temple are the sounds of birds and monkeys. A temple dedicated to Lord Shiva can be seen nearby. According to legend, the Lingum in the temple came from the soil 300 years ago, making it a particularly sacred location.

The Chawad Devi Temple in Bharatpur is a great tourist attraction since it represents the region’s history, culture, and traditions. Visitors can rest and revitalise when visiting the serene temple because of the peace and serenity that pervades the atmosphere.

The temple is rarely visited, allowing you to relax in seclusion while recharging your spent energies. Visiting the temple early in the morning is a wonderful experience.

Jawahar Burj was built for the Jat monarchs as a coronation place and victory tower. It is located within the Lohagarh Fort’s walls. The interior is magnificently ornamented with frescoes that are now deteriorating.

This location has three mandapas, one of which has murals depicting epic scenes. A regal hammam, or bathhouse, with elaborate carvings and frescoes, can be found. Full pictures of maharajas with animal trophies may be found in one section of the museum.

A genealogical sculpture of the rulers is carved onto an inscribed iron pillar. Visitors are drawn to this location because of the Ashtadhatu Gate. It is one of the must-see places in Bharatpur since it portrays stories of ancient wars, victories, and survival.

In 1730, Maharaja Suraj Mal constructed the Deeg Fort, which houses the historic Deeg Palace. Mughal architecture influenced him, and this monument reflects that impact. The fort garden’s layout is similar to that of the Mughal Charbagh. The paths in the middle divide the four gardens.

The fort is shaped like a square. The defences stand 20 metres above the ground. You may enter the fort from the north, where you can see the Redstone and marble remains. Nine hundred fountains can be found throughout the fort. You must visit during the monsoons, when the fountains are operated on Saturdays, to obtain a royal view of the rushing fountains.

The King lived at Gopal Bhavan, the main building. The view of the gardens from here is spectacular. The King’s family lived in the apartments above, while his guests were met in a large hall on the main floor.

The Keshav Bhavan, located next to the Rup Sagar, is where the King would retreat during the monsoons. In the Kisan Bhavan, the King met with his officials to strategize royal policy.

Apart from the numerous fountains, the fort’s two boat-shaped structures, Sawan and Bhadon, are another highlight. During Holi, colours were put into the reservoir, and the coloured water that flowed from the fountains contributed to the fort’s overall beauty.

Deeg, located in the Bharatpur district, is a small but fascinating town. Make sure to stop by this town if you want to learn more about the area around Bharatpur. The Palace complex and the three-day Deeg festival, which takes place in September, are two of Deeg’s most popular attractions. The Deeg palace is a grand edifice built in the Rajasthani style.

It is made up of innumerable water gardens and palaces intertwined within a succession of Charbaghs in a unique way. Roaming the palace grounds is a wonderful way to spend a couple of hours in Deeg. With its elaborate and beautiful architecture, the Deeg Fort, also known as Jal Mahal, provides flavour to the region.

Kaman, also known as Kamaban, is a historic settlement in Bharatpur, Rajasthan, that is famous for being a part of Braj Bhoomi, where Lord Krishna spent much of his boyhood. There are 84 temples in the area, the most notable of which is Chaurasi Khamba Temple.

Despite the fact that there is no idol to worship, this temple is still called a temple. This monument’s 84 intricately carved pillars are what draw travellers to include it on their list of sights to see in Bharatpur. When tourists attempt to count the number of pillars in this temple, they are never able to achieve the number 84; their count either recedes or exceeds the number. This has added to the intrigue surrounding this location.

Things to do in Bharatpur

Bharatpur is full of historical places. there are many things to do like sightseeing, food, sweets, camel ride and traditional dresses of Bharatpur.

About the Author / Rana shanu